Menu
Log in
Install the app
You are using an out of date browser. It may not display this or other websites correctly.
You should upgrade or use an alternative browser. 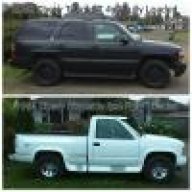 OEM style shocks are over priced & widely considered as overrated. Most convert to new shock & stiffer springs (basically what z71 has). If you get good shocks when do it your ride changes very little & you can use regular shocks from then on.

I (average joe driveway mechanic) did the whole conversion. It took about 2 hours in my driveway with limited tools & no spring compressor needed.

I used the following converting from OEM zw7 Premium Smoothride system (will work as conversion on all OEM suspension systems for @ least years 2000-2006, some systems like z55 Auto Ride will require a resistor at shock for computer purposes).

This conversion retains your towing capabilities: Many conversion kits & replacement systems do not, make sure to ask the manufacturer.

I used 5100 series because they give room for lift which I plan on doing later but you can use the 4600 series. Spoke to Bilstein & they told me they were same shock, the 5100s just allow for 1" lift in front & 2.5" lift in rear & were different colors.

I put on the new shocks first but not the springs so I could see how it went without putting in the stiffer springs. The rear end sat lower, felt like it was loaded down or had load on the hitch. The right & left rear side moved around a lot more independently of each other & bounced much easier & longer.

I then went home & put the stiffer springs in. The truck rides like new. I was afraid I would lose some of the smoothness but hadn't. The Tahoe is more responsive, rides smooth & the new set up leveled out the truck perfectly with no real height gain or loss.

Shocks were a very basic swap. Doing the rear springs (in a nutshell) I put rear up on couple jack stands (I put stands under outermost side of tow package bar that was frame connected directly above), removed wheels, removed 1 sway bar bolt & 1 lower shock off each side & let shock & sway bar hang free. I unbolted nothing else. Truck was set on stands just high enough that top of springs weren't contacting body & I simply reached in, grabbed them & angled right out. Then reversed that & put in new with rubber top & bottom from old springs fitted on new. Lowered slowly checking that they were in place when weight was going back on. Put lower shock & sway bars back on, bolted on wheels, put truck on the ground & done. I am not promoting this as a way of doing it. It is simply the way that worked for me & I felt safe doing it.

Stores like Autozone, napa etc wanted over $125 for each shock but I got them for less than half that by going to products site & finding local distributor & parts were ordered & available for pick up in 24 hours (places like shockwarehouse had 3-4 week delivery time because they order them from Bilstein then when they get them they process them then turn around & mail out to you).

I researched this for over month on forums, sites, at performance shops, product manufacturers etc. I firmly believe this is the easiest way to convert from the overrated stock OEM system to one that rides very closely to OEM, fully functional & are a superior quality product. Once the new rear springs are installed you can put on any shocks that fit the z71 package for your year. After all said, done & tested I think Bilsteins listed above are the best bang for your buck @ $444 for 4 shocks & 2 springs.

Hope this helps anyone considering converting your Chevy SUV or truck

Mayhem - Thanks for the leg work on this, as I have been contemplating this change for a while and was ready to purchase the Arnott kit at $500+ and by following your advice, I was able to get everything from 4Wheel warehouse for $425. Going to do the install this weekend and will update, hoping I have no issues as I have a leveling kit already installed for Tire height.
One question that I have is how did you overcome the electronic issues (Warnings and such on dash)? Or if anyone else knows?
The Arnott kit included a EDM to bypass but they won't sell it separately.
You must log in or register to reply here.
Share:
Reddit Pinterest Tumblr WhatsApp Email Share Link