Hey all, primarily this thread is me looking to buy a good used instrument cluster for a 2007 Tahoe LTZ if anyone is parting one out, know someone parting one out, has a yard local parting one out. If you have one to sell please send me a PM. I have been looking for one online for years and all I ever find is repair services which won't work for me for reasons explained below. If you're interested in my problem please read on and feel free to make other suggestions.

About 4-5 years ago, I had that problem where the digital read-out disappears from the gauge cluster. After researching the issue and finding out that its just one more of hundreds of well-known issues with the 07 Tahoe that Chevy never bothered to acknowledge or fix, and that the problem was likely a bad resistor (I believe) or diode or something similar on one of the circuit boards I found a local shop here in San Antonio that advertised a repair service for like $75. Great price! Sign me up!

I took the truck to them and found it was a small business owned by one man and he had his high school age or early 20-something son also doing the repairs. I gave them my truck and a few hours passed. I was told that my particular cluster couldn't be repaired. The kid showed it to me and he'd done a pretty terrible soldering job (I was trained on soldering in the Air Force and yes in hindsight I should have just done the damn repair myself) and complained the tracks were too damaged to repair (I think he damaged them not soldering the component in right). He said they did not have an exact replacement, that they were hard to come by, and offered to sell me another suitable replacement cluster they had already repaired for a little over $300. Frustrated at this point, I told them to go ahead but stipulated that I wanted all the same menu items and I wanted them all to work. A few more hours passed and they brought my truck back around to me. I checked everything and neither the oil life percentage nor the air pressure readouts worked at all. I pointed this out to the kid and he fumbled around with it for another 30 minutes and said he could not understand why those things didn't work. At this point it was late in the day, they were closing, I was tired and frustrated after sitting there for hours so I made the mistake of going home. I had a 2-year warranty on the repair and the owner agree to try and find a good working replacement cluster for me.

I could go over the "why's", many of which are my fault, laziness, waiting for money etc... but years went by and I never went back to the repair shop. No more warrantied repair and a gauge cluster that still has a non-working oil percentage and tire pressure read-outs. The truck now has 190k miles on it but we're keeping it for my son to drive. I rebuilt the suspension front to back, replaced the brakes, and had the transmission rebuilt. I also bought two new "cadillac" key fobs for the truck as the originals were falling apart. This is where I realized I really need more help on this gauge cluster.

In 2007, and I believe that was the only year but let me know if that's not right, you could program the truck to "learn" any new key fobs right from the menu system for the instrument cluster. I had already done this once before, in the past, before the instrument cluster went bad. I believe back then I had read that was only a feature in 2007 and starting in 2008 GM changed it such that you had to pay the dealer to re-program a Tahoe for new key fobs. I ordered some new ones that were gently used Escalade style key fobs and went to try and setup the truck to use them. I found that the menu option your supposed to use to do this was not an option with the "repaired" instrument cluster I had gotten from the local shop. It was completely missing. So my guess is they sold me an instrument cluster that was not from a 2007 Tahoe but probably a later year model where that option had been removed from the software. So now I have a truck with two features that don't work and no way to re-program new key fobs. We were able to get around the problem and make one good working keyfob by just moving the circuit board inside the working keyfob into the Escalade key fob case but it bugs me I've lost this capability.

So am I correct that, re-programming a Tahoe to learn new key fobs was a 2007 year only capability? If not, what other year instrument clusters offered this? Also, the part number according to GMPartsdirect.com for the instrument cluster in a 2007 Tahoe LTZ with the 5.3 Flex V8 is 20970650. Searching that PN anywhere, using any method, all I get is a few references to dealerships who either say its out of stock or they offer a "repair service". I realize a 2007 Tahoe is 14 years old at this point but I NEVER see them up for sale on Ebay or anywhere else which seems very odd. Does anyone know WHY these instrument clusters are so damn hard to find? I've tried searching ebay but that is a huge pain in the ass. The part numbers in the listing almost never match the part numbers seen on the instrument cluster itself in the pics for the listing and when I search on those part numbers I can never determine what that cluster came out of unless the person listing the part states what vehicle they removed it from in the listing itself.

So any help on this topic would be appreciated. My goal is really just to restore the functionality of the instrument cluster in the truck back to its original set of features.
T

Hey all, I realize I might not get many responses here. Just wanted to re-iterate that I am looking to buy an OEM instrument cluster verified to come out of a 2007 Chevy Tahoe LTZ. If your parting one out or know someone who is or know of a local salvage yard that has one, please let me know. I'd also like to verify the part number if possible since my original cluster is long gone and I don't know what cluster is in it currently. If you own a 2007 Chevy Tahoe LTZ and plan to have the cluster out for any reason, I'd love to know what part number is on your cluster.
T

Discussing part numbers I also wanted to get some help from the group, if possible, understanding exactly which number on a given cluster is the GM Part number. As mentioned above I see a lot of ebay auctions that list a PN but then said number is nowhere to be found on the labels on the actual cluster they're listing. I've put an example here so hopefully someone can steer me in the right direction:

Can someone tell me which of these numbers is actually the GM PN you would use to order a new one or match up to a used one? 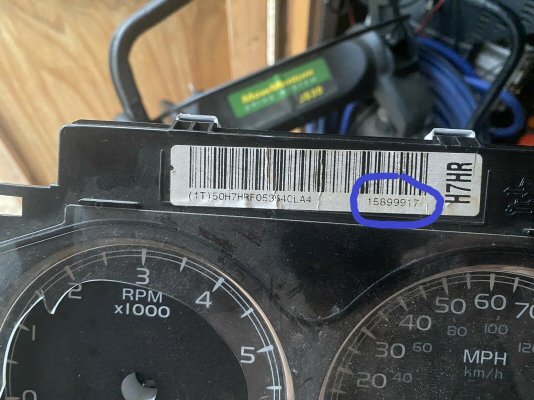 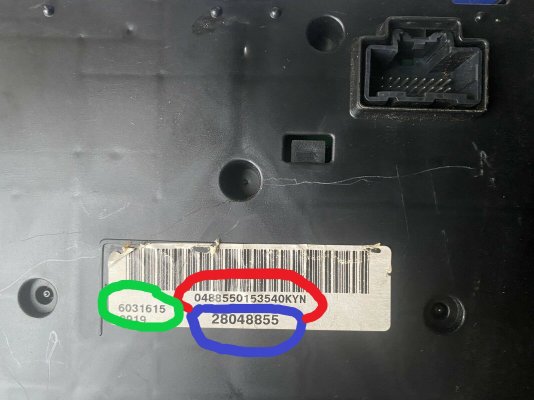 Is it one of these three numbers on the decal on the back of the cluster?

Thanks in advance!!!
T

Yep, looks like the first number on the front then. If anyone else has their cluster out and/or can confirm. Let me know. I will also likely be hitting some salvage yards this weekend so if anyone needs a cluster for an 07 Tahoe, LMK. 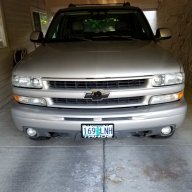 You can go back stock or customize at Digital Dash Solutions: https://www.fixmygauges.com/

$250 exchange with a lifetime warranty.
T

PNW NBS Z71 said:
You can go back stock or customize at Digital Dash Solutions: https://www.fixmygauges.com/

Thanks for the suggestion!! But looks like he only offers clusters from 2003 to 2006.

Mine is a 2005 and that is likely why I never paid attention to the years listed. I would still contact them just in case and even ask if they know of another company that does the clusters on the 2007 and newer NNBS rigs.
You must log in or register to reply here.